Padayani is a combination of music, dance, painting, and satire. Elanthoor is a Padayani village.  Choottu (dry coconut leaves tied in a bundle) , the spirit of Padayani with its thappum (beats), thalavaum(rhythms) and kolam tullal (ritual Padayani mask dance), is a regular feature in the lives of the people of Elanthoor.  Padayani reflects the ancient socialist society before the Aryanization and Chathruvarnya, the ‘four caste’ system.  So, the entire village takes active part in Padayani without any racial discrimination. With the blessing of Sarveshwari Elanthoor Bhagavathi kunnilamma, this devout village has been nurturing similar ancient dravidian period artforms.  Kallari was also practiced during this period.  Even today, Padayani and Kacchaketti Tullal, is encouraged and practiced by the people of Elanthoor.

Kolams are forms of folk deities drawn on gred areca leaf sheaths, cut and smoothened, then stitched together in specific shapes.  In Elanthoor, A large number of families are involved in the creation of Kolams.  Once the kolams are in shape, then the painting of kolam (kolamezhuthu) starts.  This is done with the 5 natural colors i.e. red, green, yellow, black and white (representing the panchabhoota elements).

The Padayani festival is celebrated during the Malayalam months of Kumbam in the Bagavathikunnilamma Kshetram.  After the inaugurating the Padayani festival by flag hoisting, the event goes on for eight days.  On the 8th day, the event is concluded with Valliya Padayani , which is dedicated to the most helpful animals in farming activities i.e. bullocks.   On this day, models of bullocks are created and are taken through the village in a procession. People visiting from neighboring villages are duly received and honored. T

Devotees worship the Sarveshwari Bhagavathi to be blessed with child, good health and prosperity and surrender to the Devi by offering kolams to appease her anger.  In the light of oil doused torches, and dry coconut leaf torches, the tullal creates excitement.  It is believed that    all sins and illnesses will disappear and peace and calmness with prevail.  It is also believed that

According to Hindu mythology, evolution of Padayani is related to the birth of Kali.  When the devas could not control the atrocities of Darikasura,    they approached Lord Shiva.  On seeing their anguish and kindled by the anger inside him, Lord shiva opened his third eye emitting fire  and thus Kali was was created with a specific task of killing Darikasura.   Kaali left for the abode of  Darika mounting herself  on Vethal accompanied by ‘Koolee Ganam’.  The fight between Darika and Kaali was really frightening. At the end of the battle,  Kaali cut off his head. Holding head in her hand and with overwhelming anger she returned to Kailasam. To pacify her and to satisfy her lust for blood, Devas performed variety entertainments like dance, mimicry, dialogues and, comedies.  But it did not work.  As she was going through the Gopura , the goddess paused a while seeing the painting that depicted an angry Kaali and then, she smiled!  She became calm and happy. Padayani is celebrated annually for the protection and prosperity of the village and its people. Hence, it is believed that misfortunes iand ill-luck in the lives of people are removed by the performance of Padayani and offerings of kolams.

Each kolam form has different songs, rhythm, and dance.  Before the Padayani starts there is a ritual of Chootu Vaippu (sacred fire created with bundles of dry coconut leaves).  The Brahmin priest of the sanctum sanctorum (shri kovil) of the Bhagavathi Temple lights the chootu in front of the Devi and after pradakshinam (circumambulation), keeps it at the kanni mula (Virgin Root) of the temple premises.  Then with Pachcha Tappu Kottu the Devi is taken in a procession to be placed where the Padayani is performed.  Even after the program, till the Devi is taken back to her sanctum sanctorum (shri kovil), it is believed,that the Devi’s presence can be felt  in the area.  When each Padayani artist wears the masks and dance, people can actually see that particular dancing in front of them.  In other words, one can see nature itself in a different form.   Padeyani Samooham puts in sincere efforts to depict preserving of the Environment in the performances. Spreading awareness that god and goddesses are residing in the mountains, forests and the ocean and hence the environment should be preserved and protected.  Similarly, the colours, coconut fronds and palm leaves are all taken from Mother Nature.  Though the story is that Padayani  is performed to appease Kali, this artform, the bigger aim/goal is   betterment of the society.  Darikasura represents darkness, and Kali represents the light that rules over and destroys  the darkness – that’s the inner strength of Padayani.  It is with the joint efforts of dedicated people from all walks of life that the art of Padayani still alive and growing.  Unlike other artforms, which are pre-planned, Padayani is more of  related to the need and situations.  Whatever is available easily, from nature, is used in this artform.  The amount of physical effort put into other artforms is insignificant compared to that required in Padayani.

The Padayani sammooham is still standing tall due to their sincere efforts in keeping the artform alive.

In todays world, the growth of Padayani artfrom is the need of times.  May Kavillama and the Saints of the yesteryears grant the blessing, in abundance, for the same! 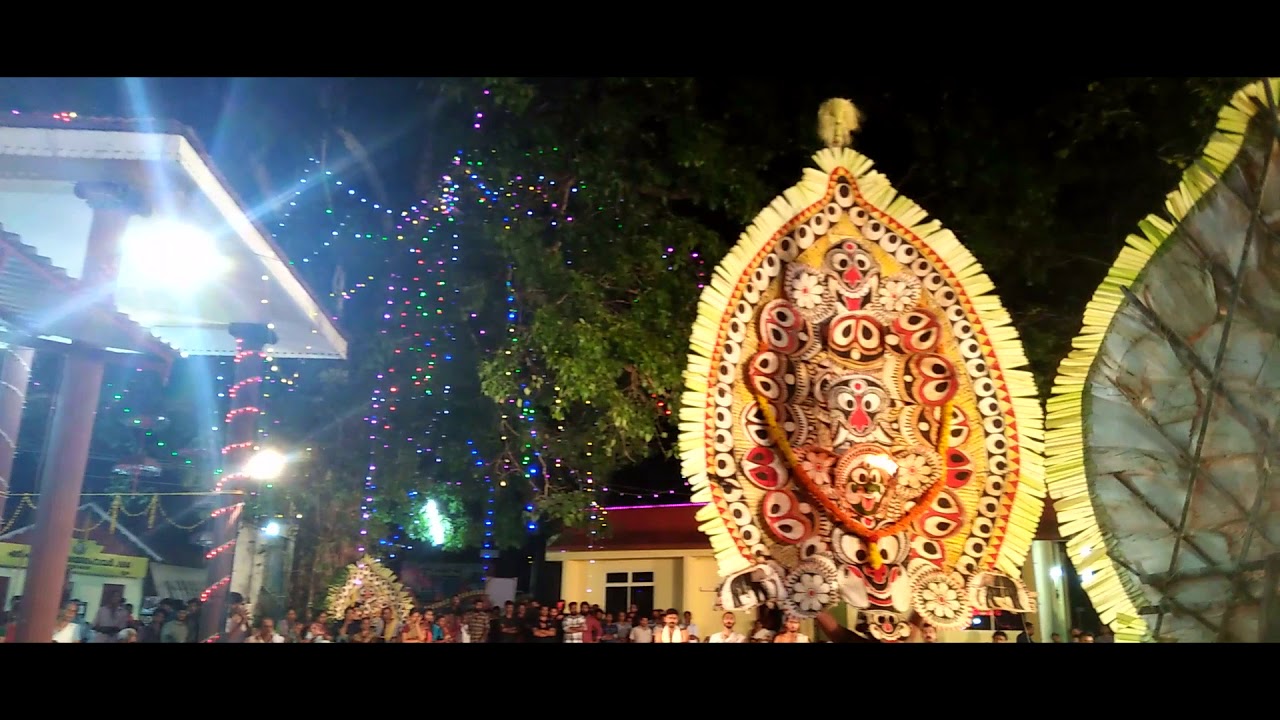 Goddess Abode in Thiruvitamkoor is the Bhagawati Kunnu Devi Temple